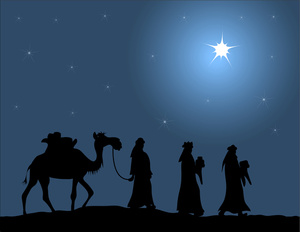 Far, far away in Siberia lived a good but poor king. He had always been told that when the Highest King would be born a star would proclaim his birth. As the poor king saw the star of Bethlehem, he knew right away that now the Highest King had been born. He chose the best things his country could offer: pearls, linen, fur, and honey to be his gifts to this new king and started his journey on his horse.

The star was bright and it made the journey of the poor king easy. Far south he met three other kings who were on their way to greet the baby king. But these kings came from very powerful and rich countries and they did not have time to wait for the poor king and his old horse. During his long journey the poor king met a beggar woman whom just had had a baby. The poor king gave to her his fur to cloth the baby.

The journey of the poor king continued. He came to a very troubled country. He thought how these people would need the Highest King very much. Seeing such sufferings made the heart of the poor king ache. He gave away everything he had until he did not have anything left to bring to the Highest King. But he continued his journey anyway. When his old horse died he continued by walking.

The poor king finally arrived to a harbor. The poor king met an old woman saying goodbye to his only son who had been sentenced to slavery for 30 years to pay off his late father’s deaths. The poor king could not let this happen; otherwise the old woman would have been left without anybody to take care of her. So the poor king promised to take his place. Thirty years the king worked as a slave. The years were long, the work was hard and over those years the king saw unending sufferings and sadness. Sometimes he wondered why there weren’t any signs of the Highest King anywhere. But still the poor king believed in the star.

Finally those thirty years passed and the king was free to go. Now he was old and tired but he continued his journey hardly remembering any more what he was looking for. At the end he arrived to a city where there were people from all over the world. They were having a big celebration. There the poor king met the woman whom he had helped years ago. The king did not recognize her, but she told him that he had helped her when she had had nothing. “I gave you my heart, even though you did not ever know that. Something even a beggar can give: one’s heart”. She also told him that today was the Highest King dying in the city. Oh, the poor king would meet him after all! The king followed the crowds and came to a hill where there were three crosses. The poor king looked in the eyes of the person crucified in the middle cross and he immediately knew this was the Highest King he had been looking for all his life. The poor king was deeply sorry that he had given all his gifts away. But then he remembered the words of the poor woman. He knelt down and said: “My Lord, take my heart!”

Christmas Blessings to you, my fellow pilgrim! You have everything it takes!

© Mari-Anna Stålnacke and Flowing Faith, 2009-2022. Unauthorized use and/or duplication of this material without express and written permission from this site’s author and/or owner is strictly prohibited. Excerpts and links may be used, provided that full and clear credit is given to Mari-Anna Stålnacke and Flowing Faith with appropriate and specific direction to the original content.